Who would have thought, when I left this morning, that I would get a marriage proposal and a tango lesson?

I walked from Kineta to the next town and sat at the beach for ages. Just staring. Catching sun. But not to much, because the redness of the day prior had not yet vanished. I wanted to walk on to Istmia beach, because there was a camping there. Even though it was closed, maybe I could put my tent there.

One thing in Greece is that there are many big, big dogs. Most of them are behind bars, but some of them just walk wild. After being attacked by one in Athens (it bit me in my foot, luckily my hiking boots can stand dogattacks) and almost being attacked by one yesterday (only to be saved by its owner, who came looking why his dog was barking. So far for the phrase: “Barking dogs don’t bite”). Since then, I am not really a big fan of those dogs any more. Also today, I came across a few wild ones. But raising my voice and keep walking saved me today.

After another few km the road became to narrow, and the cars were still going fast. I didn’t dare go on through a corner, there was no sight and if a car would drive by, I’d most certainly be killed. So there I was, in the middle of some road, and I couldn’t go on. I tried to stop a car… and it did! A woman, Natasha, would drive me to Istmia. She is a teacher at the university of Tripoli, Greece (she studied anthropology and economics, fantastic combination!) and -fortunately- spoke English fluently.

Isthmia is were the Corinth canal flows into the sea. I walked over a little bridge there, trying to see why there were so many people on it taking photos. I realized when I looked down. The Corinth Canal is not a canal I am used to in Holland (a nice 1 or something meters lower than the edge), this canal was streaming more than a hundred mtrs under. It made my knees go jellyish. But I kept standing up. And walked -very cool- to the other side.

In Isthmia I wasn’t near the beach, I tried to walk there, but again the road was too big and it was out of direction so I went inside a little restaurant to get a drink. It turned out to be a family business and the brother of the owner tried to set me up with his nephew Alexandros. He wanted him to get married and I would be perfect to get the job done. Alexandros eventually drove me to Korinthos, because again the road was very big and full of cars driving very fast, so walking was no option. There was a bus though, but the uncle insisted Alexandros would drive me. When we were in Korinthos he got a call I had forgotton my tripod, so we went back and again to Korinthos. Tonight I am having a drink with him to thank him. 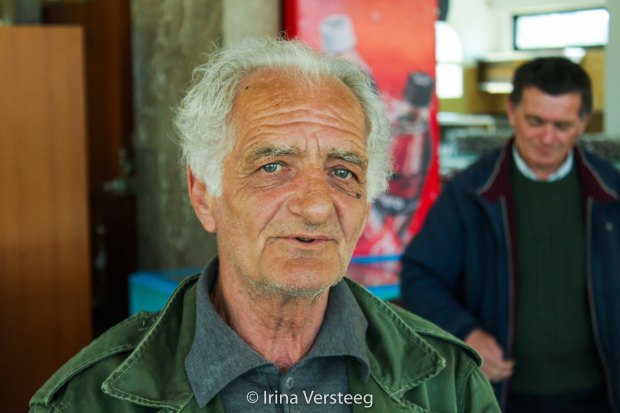 Alexandros’ uncle, the one that proposed for his nephew.

So, at 1 o’ clock, I was already in Korinthos. Sitting in the sun, writing postcards, writing blog entries, waiting till Antonio (my couch surfing host is done working. We later went to his house, which he shares with several students. We celebrated one of their birthdays. Antonio played violin. With two other roommates we went to tango class and everyone went for drinks afterwards. It was a late, but great, night.

Antonio and his roommate took me on a walking tour around Korinthos.