Back in Rome again. In the rain… Rome and I have a difficult relationship together, with the weather always being less than optimal. Luckily I’ve already seem all the touristy landmark stuff, so I can hide myself somewhere dry. It turned out to be the library. Good place to relax, reading random -very old- Italian books I don’t really understand, using the free internet and staring at other people who seem very engaged and frowning as though they are doing/reading something very difficult, always fun to watch when you’re on holiday yourself.

Rome in the rain. 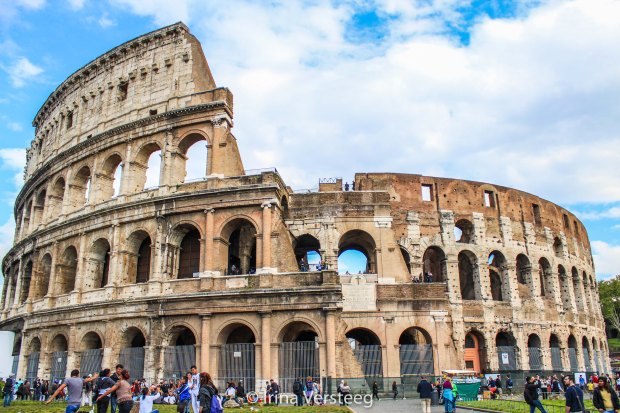 The Colosseum in Rome.

And finally, Rome. In front of the Trevi Fountain.

In Rome I’m staying with Andrea in his beautiful apartment in the student neighbourhood. I never really visited this area, but it’s really nice. Especially at night, when everyone is drinking in the streets, making a party in the moonlight. Plus, all the drinks and the food are really cheap. Another area I’m also getting to know better is Trastevere (=at the other side of the river Tiber). It used to be a very poor area, but they boosted it and now it has all the nice little restaurants and bars.

And now for some adventure in Rome. I want to walk the Via Francigena (the old pilgrim’s path to Rome) in the other direction, to the North. To show you’re walking the Via Francigena you have to have a pilgrim’s passport and collect stamps in it on the way. The best thing would be if my first stamp was from the Vatican, and since I was meeting up with the president of the Via Francigena association, she called someone and arranged for me to enter the Vatican to get a stamp. How cool is that! I always wondered who the other people were, that walked carelessly through the other entrances of the Vatican, not bothered by tourists -who only get to visit the St. Peter (after waiting in line for ages) or the Vatican museum- or the Swiss guard. And now I would be one of them!

Or so I thought. It proved to be a bit more difficult to enter the Vatican. First of all because it was a Wednesday (that’s when the Pope speaks to people or does a mass or something) in spring holiday and the square was absolutely packed with people. I couldn’t walk through. Secondly, because it was Wednesday, they wouldn’t let me near the gate I was supposed to pass, because of tighter security. After a lot of talking and calling with the president (hehe), they let me through and I had to get into a special little house to get checked with a metal detector and stuff. Next horde was the Swiss guard, but apparently you only have to say you are a pilgrim and they let you through.

So I was in the Vatican! Haha! But now? I really had no idea where to go to. I went into buildings and they pointed me to other buildings, where people pointed me to other buildings. I wanted to walk to another gate but was stopped by a guard with a huge gun. No point in arguing with a gun, so I turned around. I found a little office, where I could leave my passport and get a visitor’s badge. And again they pointed me to the wrong building, but finally, at the end, I made it to the right office. And I got my stamp. 🙂 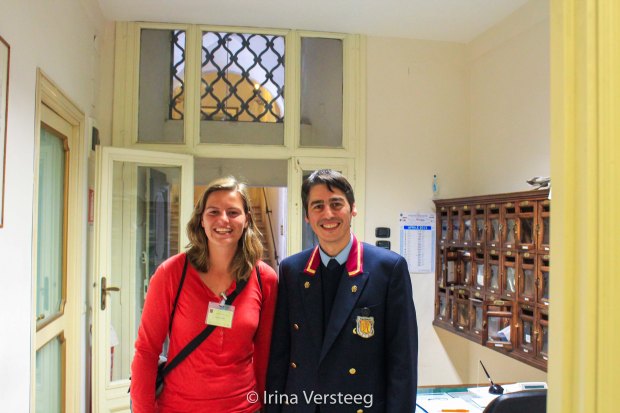 Then the man (father? referent?) asked me if I wanted to see St. Peter’s tomb, in the catacombs. Of course! So we walked through little hallways and passed restricted areas to the Tomb of St. Peter. This man probably thought I was a very pious girl, traveling all the way from Athens and still continuing North, plus he had gone through some effort to show me the tomb, I thought. I wanted to show respect. But how to do so? I am not raised religiously, and wasn’t really sure how to behave myself in front of St. Peter’s tomb. I mean, this is the heart of christianity. Jesus went to heaven, so St. Peter is sort of the next best thing. Behind the man I practiced the Sign of the Cross, was it from left to right, or right to left? Going to the heart, or starting from the heart? I could say something in favor of both.

We got to the tomb and it was marvelous. He let me up some small stairs and he stayed behind me. I did a quick Sign of the Cross in an unspecified direction. Then I sank to my knees, folded my hands, closed my eyes and counted to 30, praying to St. Peter. After this I allowed myself to properly look around. It was fantastic!

So I prayed in front of St. Peter. I looked over my shoulder and the man was happy. When we returned we were stopped because the Pope was passing by. We had to wait a bit. I was thrilled. I love the new Pope, Papa Francesco, he is smiling all the time! Seeing how happy I was, they sent me forward. And when Papa Francesco passed, he stopped (literally two meters away), he looked at me (only me, no-one else around!), smiled and waved. Then he blessed me (from left to right!). I smiled and waved back. What a great guy!

And then I was leaving again. Also leaving Rome. Tomorrow I’m starting the Via Francigena. Only about 2000kms and I’m home…