We (Jelle and me) were following the Via Francigena further North. Getting to a lesser known part of Tuscany, and briefly dipping our toes in Liguria before returning to Tuscany. Going slightly up to start the Cisa Pass (Passo della Cisa) over the Apennines.

But first, a day trip to Florence (Firenze in Italian). Because, if you’re that close, you cannot miss this bella citta of the Renaissance. The weather wasn’t great, but that was actually OK, it wasn’t too hot. We just soaked up all the main sites: the Duomo, the Piazza della Signoria with the Palazzo Vecchio, the river Arno with the Ponte Vecchio, and then made it up to Piazzale Michelangelo. Getting lost in little alleys in the main time and enjoying a wonderful Italian lunch, it took us all day! Tired and soaked in beautifulness we made our way back to Lucca.

The next day was a day of hiking again. We left beautiful Lucca and soon found ourselves on a dirt road next to a small river. Here we met another pilgrim heading North! Enrique from Spain. He had walked plenty of long distance pilgrimages before and was now walking from Rome to Santiago. He taught us pilgrim’s songs (one in Latin!) and we shared each others’ views of the world.

Then, in the middle of the day, happiness struck… I got an email confirming I had been accepted to GP training starting in September, when I’m back in Holland. So I have a job when I get back (a super awesome job!) so I was super happy, and crying tears of joy. We all drank beers together.

We were heading to Camaiore, but had booked a 4-star hotel (who said being a pilgrim can’t be luxurious?) at the beach (Ligurian Riviera) at Lido de Camaiore. So we took a bus down the hill and enjoyed an evening of luxury.

Walking along a little river. It looks like a fairy tale.

This is where we celebrated my new job with a beer.

The next day we went up the mountains again. This day going to Massa. I was having a rough time with everything hurting, Jelle had energy to spare. So he hiked up another mountain (to 1700m!!) while I “just” followed the path. It was actually quite nice, a really narrow and small path through the olive trees. I met Vincent, a guy walking from Scotland to Jerusalem (!!).

Near Pietrasanta (in the middle) I saw an old church. There was a lady and she asked “Are you a pilgrim?” I said yes and she replied: “Ah, good. Come!” She appeared to be a teacher of a primary school class and they were learning about the Via Francigena, their own local history and pilgrims in general. The teachers were happy they found a live specimen. So they showed me in front of the class (“Look guys, a reeeeaaaal pilgrim!”). They all asked questions and wanted to hold my staff. I then got the name “Irina la Pellegrina” (Irina the pilgrim), which I actually really like.

After lunch in Pietrasanta (beautiful city with a lot of art) I continued to Massa. It was mainly on asphalt roads from there on, passing by many marble groves. At Massa we had to go over a final hill an then we could relax in the ostello, situated in an old palace. 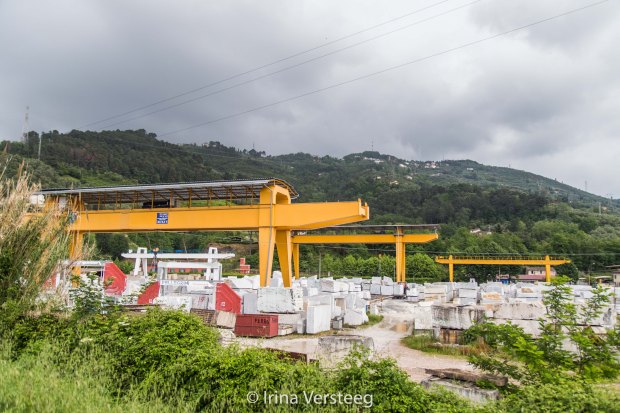 Marble groves along the way

The day after was a hot day. We got up a hill with a good view of the sea, and basically followed the shape of the hill through the wine field. At the end of the hill we came by some men drinking wine in a garden. They invited us over. The house belonged to a couple, the lady being 84 years old and really in charge. The men drinking were locals, that came here often to buy wine from the lady. We sat and drank with them. Then just before Sarzana we came through Luni. Luni is an old Roman city (back then it was situated on the sea, and a place where many pilgrims to the Holy Land boarded a boat). There are excavations going on, and you can visit the old Luni, including an old amphitheater.

Drinking wine with some locals.

And from Sarzana we made it to Aulla. We had to go over the first real hills in quite some time. Enjoying an early lunch on top of a hill at a ruin. Climbing a bit more afterwards and then gently going down through a lush forest. In Aulla, we got our first real glimpse of the Apennines (way higher than expected!) 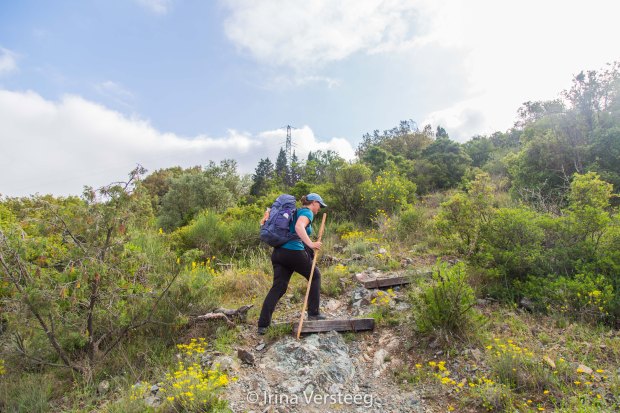 Going up the hills

Walking through lush forests… Jelle is practicing to be more Italian in traffic. 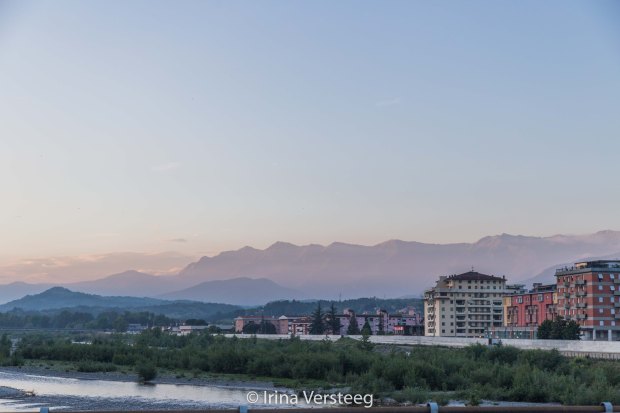 Aulla. The first real view of the Apennines.

The day after Jelle left, and I used my rest day to visit -very spontaneously- Cinque Terre. Since the day before a woman pointed at my backpack and shouted “Monkey!” (I have a stuffed monkey tied to the back of my backpack) and she turned out to be an instagrammer I was following. So we decided to meet up in Cinque Terre (there are worse places to meet up). And I just had a nice relaxed day. Tomorrow a new hiking team member, Marlies, is coming.